A huge crowd at the Nabe tonight and a spirited debate from all five candidates. 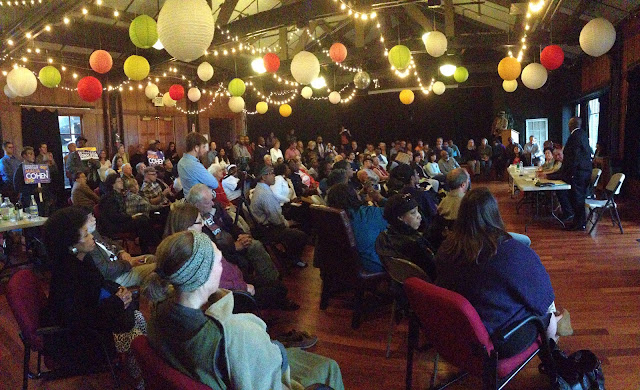 A speaker system would have been nice. I'm sure Marlene Tran had lots of good things to say, but we couldn't hear a damned word she said despite the protestations of the audience.

All, Tony and Malia especially, please get your facts straight re AirBnB: as of this summer, the loophole or ignorance of the law or whatever you want to call it has been addressed, and AirBnB will be collecting the full 14% tax on every AirBnB transaction. Period.  Tony Kelly made a strong point that home-sharing should not be put on the ballot, because if passed, the only way it could be changed is through another ballot measure. If legislated at the board of supervisors, they can the revisit it in the future and make tweaks to is when things show themselves to work or not.

For this reason, David Chiu's legislation should not be 'dead on arrival' as Kelly suggests. Supervisors need to step up and support it vociferously, help amend it where needed, and make it work for all San Franciscans.  As Supervisor Cohen said, many home-sharers use these services to help them stay in their homes.

Malia Cohen came out strong against what she considered Marlene Tran's support for keeping the status quo of the Ellis Act, passing out photos of Tran rallying against Senator Mark Leno's legislation.

Tech buses in MUNI stops?  All said 'no'.

Lots of good political theater - too much to detail here - but in the end, Tony Kelly received the club's endorsement.

Oh, and I hate these disrespectful people (guy in the hat, I'm talking to you!) acting out and interrupting speakers.

Posted by Chris Waddling at 8:31 PM

Although you can post anonymously, I encourage you to post as yourself or under a pseudonym in case other readers would like to respond to your comments. Thanks!

•Active Permits in My Neighborhood